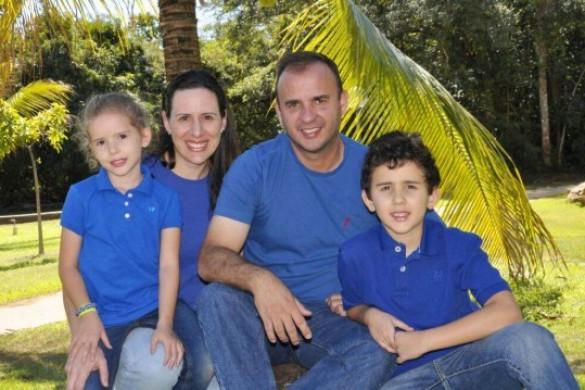 I was not born in a Christian home. When I was a pre teenanger, my younger brother invited me to go to Sunday School and at a church service in the Bible Church of Araçatuba, while hearing a message about heaven and hell, and the Holy Spirit touched me and I could not resist. I made the most important decision of my life when I was 12 years old.

Later on, when I was 18 years old, I went to serve in the Air Force in Campo Grande- MS. While there, I fell away from the Lord and I saw that my life was going down a path of no return, but by God grace, I went to a meeting at the base and the message touched my heart profoundly, that very day I decided to leave the Air Force. I returned To my home town after leaving the Air Force and wondered where I could be useful in serving the Lord. That same week, a friend asked me if I would be willing to go to Word of Life in Atibaia- SP, not knowing what I would do, I told him I would go.

I arrived in Atibaia one week later and I began to work as bus driver for the EMME group, in 1999.

In 2000 I met a pretty girl that was a student, she later became my wife. In 2001, the EMME group moved to the state of Paraná and I remained in Atibaia, serving in the camping ministry.

In 2005 I was invited to serve in Word of Life Mid West, in Caldas Novas, Goiás. Our son, Gabriel, was born in 2007 and our daughter, Débora, in 2009. We have been serving the Lord with Word of Life in the Mid West for 12 years. We have seen the Lord at work first hand, and I am thankful for the opportunity to be used of Him.

I was born in a Christian home, where we always went to church. I accepted Christ as my savior at a Youth for Christ Camp in Brazil (MPC) when I was 12 years old, at a camp fire.

When I was 19 years old, while listening to the EMME group (a ministry of Word of Life Brazil that teaches music and evangelism) I felt God calling me to serve Him in full time ministry. In 2000, I entered in the EMME group, where Edwin was the bus driver. We both decided we wanted to be in ministry when we married. We got married in 2001, and from 2002-2005 we served in the exciting Camping Ministry with Word of Life in Atibaia. Since 2005, we have been serving in Word of Life Mid West in various aspects of ministry; Inn and family Ministries, camps, day camps and conferences. We have two children, Gabriel (2007) and Débora (2009) who were born to us since we have been serving in Caldas Novas.

"And whatsoever ye do, do it heartily, as to the Lord, and not unto men;" Colossians 3:23