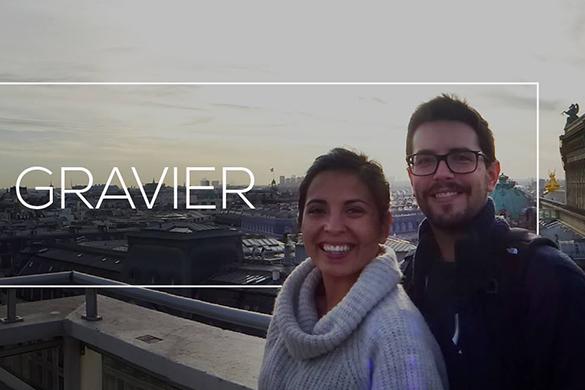 In September 2018 God gave us the opportunity as missionaries to move from the mission field in Dinan (Brittany) to Paris. We got the privilege to serve in connecting the ministry with Local Churches (LCM).

How? By serving local churches, pastors, youth leaders, through the youth ministries, as well as providing resources and trainings.

What matters the most to us ? That the teen grows in his faith and that every teen everywhere, including their families, hears the Gospel.

Evangelism, discipleship and trainings are our main focuses.

But this, God never meant we do it by ourselves. Our dearly partners are key in this mission, in prayers, presence on the field and financial support.

Our daily prayer and desire is that God uses us for his glory in every opportunity. He give us wisdom to love the best we can his people, and that we may not forget any of all his benefits among us the last 5 years serving him in France.

I came to know the Lord personally as my Savior in January 2014. I was 27 years old.

I grew up in France in Bourgogne, south of Paris. We moved there with my parents when I was 6 years old. Before that, I was born and raised in Normandy. I am an only child. My dad passed away when I was 11 years old. God was never mentioned in the house, like in most homes in France I would say. That way I build myself years after years as an atheist, public school teaching me all sorts of things excluding totally the existence of God (it is only after I was saved that my mum started opening up about her Christian roots, that took place in her early life and only recently she was able to profess her faith in Christ). I am still discovering a lot about my childhood talking with her nowadays.

Once I graduated from High-school when I was 18 years old, I studied Advertising and could work across the world. At that time of my life I think people would have said that I was a good friend, faithful and honest. Surely, I thought of myself to be a good person, and even an example for others in some ways (especially when it came to work, the aspect of my life I was focusing on in my 20s) - today God shows me all the mistakes I’ve made and how much of a sinner I am, I was so far from the truth…

The last time I had to move for work was in 2013 when I left for Sydney. During those first months in Australia, I started to read some books (surprisingly because I was NOT “a reader”). Those books were mainly apologetics. Within a few months, I still can’t explain in detail why, I needed to go back home in France that I had left almost a decade ago. I wasn’t in good shape.

Once in France, God used different people in my life, in a way I wasn’t even realizing at that time. I started to go to an Evangelical Baptist Church in Paris in October 2013. I started to read the Bible on a daily basis and attend Church on Sundays, even a couple of times on Thursday nights where the Church would hold a Bible Study group. I could understand within a few months what was going on deep inside, I took conscience of who I really was, what was the absolute truth of the creation, the earth, … my sins. And I asked over and over God to forgive me and teach me His ways. In January 2014 I understood the Good News of Christ dying for me on the cross to forgive my sins and coming back to life to be next to the Father to intercede for me, granting me eternal life.

During the months following my salvation, God clearly showed me so many things that were wrong in my life and that I had to change. Then I decided to go to a Bible Institute, a missionary and my pastor agreed with me.

I studied in Word of Life Argentina from September 2014 to July 2016. I got married with Abby and since September 2016 we serve together the Lord in France as missionaries mainly through Word of Life Fellowship, serving the local churches to reach the youth for Christ.

My parents are Christians, but It wasn't until I was 8 years old that they started going back to church (Haedo, Buenos Aires, Argentina). So when I was 11 years old I started to go to the Bible Club in my Church. A leader got to know me better and she helped me to be more involved, because the club was for teenagers from 13 to 18 yo and I was only 11, the youngest. She started to do a discipleship with me. At that time I understood my condition and what Christ did for me. I gave my life to Jesus in our first meeting. I was baptized when I was 16 years old and right after that I started to serve in kids ministry on Sunday school, and when I was 17 yo I served in my Bible club doing discipleships while having some other responsibilities in the team. It was a beautiful time where God taught me how to work in a team and how to serve him with my gifts.

In 2013, I was then 21 years old, my parents got divorced. It was a very difficult time for me and my brothers and I decided to take a year off from my study/work, and go to a Bible Institute where I could stay strong in God's hands during this difficult time, studying in depth the Word.

In my second year I began to ask the Lord to put a vision in my heart for a certain community or country where He would want me to serve. I joined a prayer group to pray for France where Guillaume also was. Little by little God started to put a burden in my heart, by praying for the missionaries there, knowing their challenges in this country and prayer requests about how local churches were needing so much support. It was during one of those nights when I was listening to a chapter being preached that this verse touched my heart.

“Look at the nations and watch- and be utterly amazed. For I am going to do something in your days that you would not believe even if you were told.” Habakkuk 1:5

Without even realizing it, nearly every week my heart was drawn more and more to France.

In December 2015, after one year of praying with Guillaume and getting to know each other, we travelled to France to meet his family and church, and in that month God called us clearly to serve in France.

Once back in Argentina and after we prayed, soon God gave us peace with his Word and with every advice we were taking from the authorities in my Church. God has been preparing so many details, the big and small ones;

He has been leading in His perfect control each step we took. We got married in July 2016, started to serve in France in September 2016 and now it's been almost five years and a half that we’ve been serving in Paris, France.

-But who am I, and what is my people, that we should be able to offer so willingly after this sort? for all things come of thee, and of thine own have we given thee. 1 Chronicles 29:14