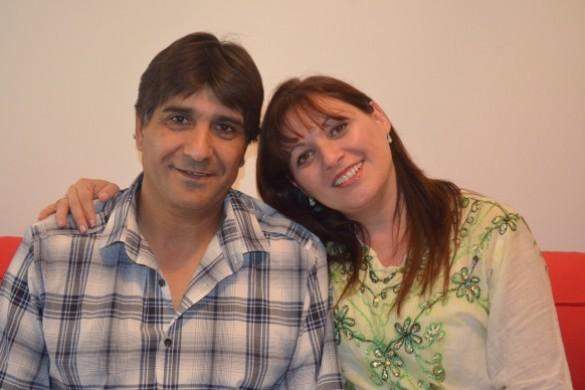 Both Omar and Noemi have spent time in the Middle East, Kurdistan (one year) and Pakistan, involved in medium terms missions.

I am from Buenos Aires, the capital city or Argentina. I wasn't born in a christian home. I had the privilege of achieving my dream of playing professional soccer. I played in several clubs. Among those Almagro and Quilmes and became champion in both. That made it possible to be part of one or the most important five soccer clubs in Argentina, Racing Club, where I had the opportunity to play in the International Tournament called Super Cup, where the best teams in South America play. We played versus Cruzeiro from Brazil, in Brazil, in a stadium of 120.000 people and won the Super Cup. But the most important thing that night was that I scored the final goal and it is still remembered each year in the media.

After I finished my soccer career, a friend invited me to talk about soccer at a place I had never been to, but I was impressed with it, this place was Word of Life Argentina. Following the talk, a person opened the Bible and at age 30 I heard the Gospel for the first time. I didn't make a decision that day, but I left with the impression that there was something good for me in that place. Two years later, September 7th 1992, the same friend invited me to another evangelistic activity and that day I received Jesus Christ as my personal savior. .

This decision changed my eternity and life forever. giving me a new meaning in life. My life had a purpose that soccer couldn't give me even though I had reached a climax in South American soccer.

I felt God call me to study His Word at the Bible Institute for three years. I also served in my local church for 15 years. Finishing my studies God gave me the opportunity to serve for one year in Kurdistan, northern Iraq, where we started two soccer schools and witnessed to Muslims.

Returning to my country as a professional coach along with another christian friend, we coached together in Puerto Rico where we were champions with the River Plate club of this county. There we had the privilege to preach the Gospel to the team.

Together with my wife Noemi we have the privilege of serving as missionaries with Word of Life Argentina in different areas as well as counselling Bible Institute students, serving in our local church and teaching God's word. I also do soccer clinics at churches, schools and sports marathons all over Argentina and other countries.

I have two great passion: Soccer and Preaching the Gospel.

I from a northwest province of Argentina, called Catamarca, around 1200 kilometers from Buenos Aires. Since my childhood I attended a Christian Evangelical Church where my grandfather was the pastor. He and my grandma influenced my life greatly, even though my parents weren't christians. When I was 7 years old I received Jesus as my personal Savior.

I continued to grow through Sunday School. When I was 9 years old, a missionary visited our church and shared his testimony which impacted me and that morning I made the decision to be a missionary. This desire grew and when I was 19 years old I made the decision to prepare myself and entered the Word of Life Bible Institute in 1992. Three years later I graduated and became a missionary with Word of Life Argentina serving in the Ministry department, also as a counselor for Bible Institute girls. I also serve at my local church in Buenos Aires with ladies meeting and camps.

God gave me the privilege of going on two missions trips to Pakistan (two months each time). In that country, so far and difficult, I serve in Christian churches among the Muslim population.

Together with my husband Omar we are part of God's work serving God full time at Word of Life Argentina, in our church in Buenos Aires and Missions trips in Argentina and another countries.

The Lord your God which goeth before you, He shall fight for you. Deuteronomy 1:30