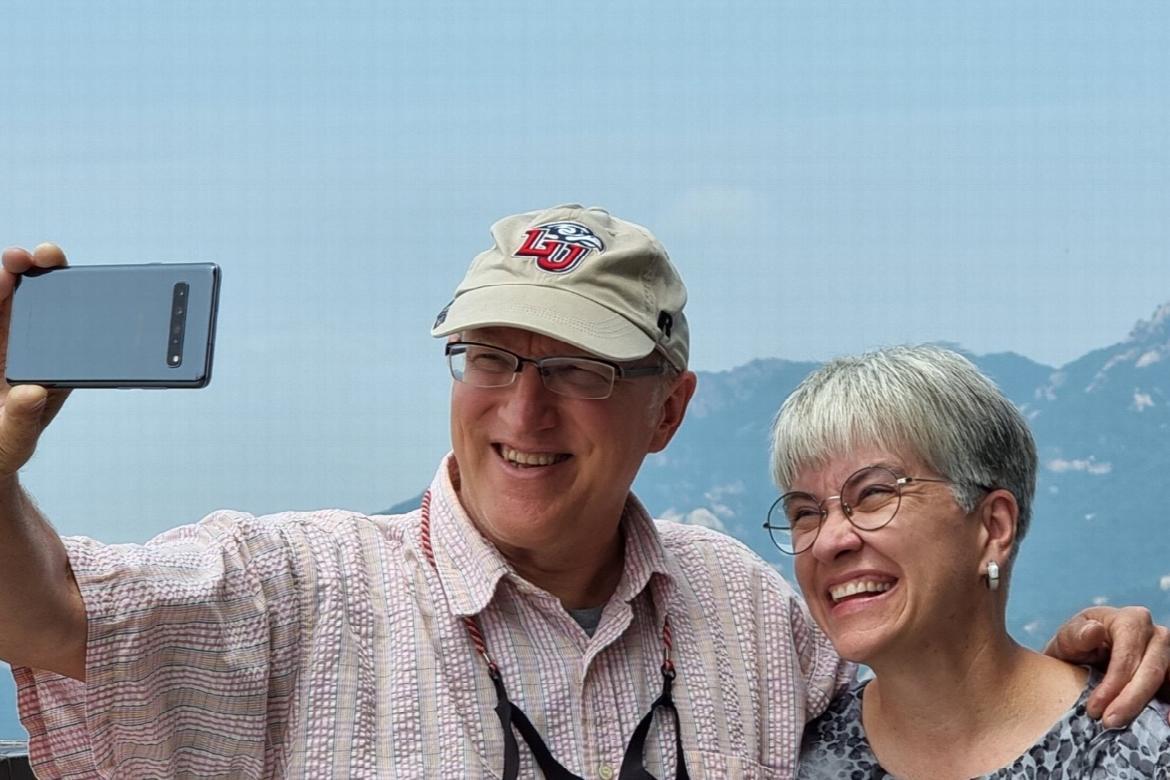 Steve and Rhonda are currently located at the Word of Life Bible Institute (WOLBI) on Jeju Island off the southern tip of Korea. A lot of their focus and energy is invested in teaching and training WOLBI Jeju students in the Word of God so that they can eventually go into other areas of Asia to do the same thing. Steve is currently the Executive Dean and a resident professor at WOLBI Jeju. Rhonda helps him in the office as an administrative assistant. Steve is also the WOL ministry coordinator of the Jeju Island team under the direction of our WOL Korea Director and good friend, Jacob Morse. Steve and Rhonda are in a stage of life now of doing more coaching of younger staff AND they love it!

Steve was born into the family of Lou and Thelma Nicholes a few weeks before they went to Schroon Lake, NY where they joined the staff of Word of Life. At the end of the summer they moved to southeastern Ohio to pioneer the Word of Life Bible Club ministry in the mid-west. When he was four years of age his mother took a Bible and explained to him how to know God personally through Jesus Christ. Beside his mother's bed he prayed, inviting Christ into his life. But when he was five he wasn't sure he really meant what he did when he was four. So, just to be sure he prayed again, "Lord, just in case I didn't mean what I said when I was four I want to be sure. So I ask you to come into my life and take away my sins. I want to be a child of yours." Then he turned six. He was a lot bigger now, older, more mature, and probably understood things more clearly. So you can guess what he did when he was six and seven and eight and nine. It seemed that he was always doubting his faith.

In fifth grade at the Christian school a guy named Louis sat next to Steve in class. One year, after summer vacation Louis wasn't there. Apparently, during the summer, Louis had despaired of life, taken a shotgun, put the end of the gun into his mouth, put his toe on the trigger and took his life.

As Steve heard what happened to Louis he began to ask himself what made his own faith any different. Was Steve only a Christian because his parents were Christian missionaries? If his parents were Buddhists, would he just follow them in that? So he went off by himself with his Bible and God, asking many questions. He told God that he wanted to know Him personally no matter what friends or family did. Since that day he never doubted his salvation. So when did Steve come to know the Lord personally through Jesus Christ? Sometime between the ages of four and fifteen.

Rhonda grew up in Virginia in the home of WOL Local Church Ministries staff, Ralph and Louise Green. There was never a time when she did not know about the Lord. At the age of six she made a profession of faith in Sunday School and was baptized. However, she struggled with doubts about her salvation for many years following that. It was not until she was actually a missionary on the field that she understood that Christ's death on the cross in her place was more than enough to cover her sin: past, present and future. There has not been a doubt in her mind about that since! It was when she was 16-years-old that she yielded her life to the Lord on WOL Island at a campfire service. At that time, she knew that it would involve missions. From that time on she began to plan and prepare to become a missionary. As a senior in college, Rhonda attended a missions conference at WOL Inn, where she heard Steve sharing about the vision the Lord had given him for reaching Asia. When she heard it, she thought, "That is something I could really get behind and help with." The rest is history...they have four children: Ben, Anna (husband Jacob Eggert), Daniel and Abby. Steve and Rhonda have been in Asia serving with WOL for over 30 years.

1 Corinthians 16:15 I urge you, brethren—you know the household of Stephanas, that it is the firstfruits of Achaia, and that they have devoted themselves to the ministry of the saints