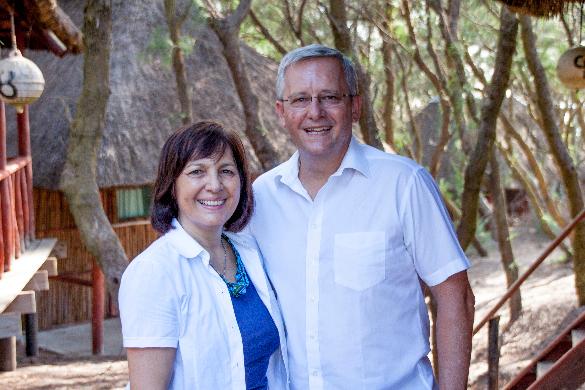 My initial function is to implement the work of the Word of Life in Mozambique. In the first five years (2009-2014), my duties were almost planter:

• Build a network of contacts with churches and pastors.

• Begin to form a team of foreign and domestic missionaries.

In the coming years, in addition to these functions, the following is required:

• Start looking for a place for the event center PVMZ.

• Expand the ministry across the country.

I was born in a family of Brazilian missionaries serving God in the interior of Brazil. I was privileged to hear the gospel early in my life. Believed in Jesus as my savior as a child, around 8 years old, where the Ranch Word of Life had a very important role. This decision was confirmed in my teens when I became part of a Bible Club and was discipled by a professor from the Word of Life Biblical Institute in Brazil. In this environment my faith grew strog, then I went to study outside of my town, wanting to be a pilot. Away from home, God had, in His grace, the opportunity to deal with me in a most personal way. Clearly called me to a "flight" much higher, serving Him in the ministry. I finished the College, and went to the Word of Life Bible Seminary, where I studied for five years. I married a girl who was in the same church, the same Bible Club and also studied at BI. Form a family with three daughters, now already married, working, serving God in their churches, one of them in the Amazon, missionary among the Indians. With great joy we worked in pastoral ministry, for 8 years in a church and for 20 years in another. Also taught in the Bible Institute as external teacher for 22 years. It was then that God has called us to the missionary ministry in Africa. We came to Mozambique in October 2009 to start the ministry Word of Life, where we are since then, with much joy.

I was born into a large family of 9 brothers and my parents taught us the Roman Catholic religion. But when I was in the third year of high school, a classmate invited me to a Bible Club, directed by the Word of Life. After reluctant for several months, I decided to accept the invitation. My intention was only to please my friend, but that night the Lord touched me and I received Christ as Lord and Savior of my life.I was 17 years old. My sister also converted that day and today 6 of my siblings are Christians and many nephews and in-laws too. Glory to God!

When I finished the Biology College, went to the Word of Life Bible Institute in Atibaia, SP, where I studied for three years the course of Christian Education. I got married on graduation day. We had 3 daughters and served as church pastor for over 25 years. At that time, God called us to be missionaries in Africa, in Mozambique, with Word of Life.

In those years also made visits to the Central Hospital, where I could take the Word of God to many patients and see some surrender to Christ. Glory to God.

We love the Mozambican people and we have seen the result of our work. Some already engage with us, and teach others, the need and importance of Quiet Time and discipleship and also the seriousness of righteous living and holy as God's Word says.

We felt the need of committed missionaries and leading the Word of God seriously, but what we can do, want to do the best. "The harvest is plentiful, but the laborers are few. Pray therefore the Lord of the harvest to send out workers into his harvest. "

1 Peter 4:2 that he no longer should live the rest of his time in the flesh for the lusts of men, but for the will of God.